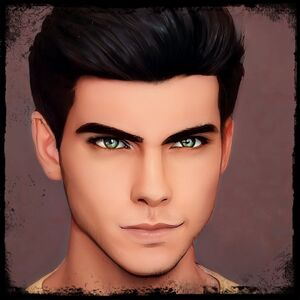 Maxie is very attractive by most standards, although he does little to exploit it intentionally. With a muscular and well-defined body and a disarming smile, his looks alone could win fights where his fists fall short.

Unlike many of the heroes even at his own school, Maxie rarely wears any costume other than its own uniform, preferring his normal street clothes in all other circumstances with a clear appreciation for the punk aesthetic. He also almost never wears shirts, settling instead for an open jacket in situations that call for modesty. Regrettably, even those situations are unlikely to control his penchant for losing articles of clothing during a battle. It's a problem, and he's working on it.

On the surface, Maxie appears to be extraordinarily aloof, giving the appearance of someone who is brooding and introverted. In the company of friends, however, his personality shines; he is an exuberant Cajun man whose slang is as confusing as his mannerisms, with a surprising amount of patience for someone who gets into fights as often as he does. With memories firmly in mind of a life of poverty, Maxie relates easily to those of lower social status, and finds wealthy or prideful people to be insufferable to the point of violence.

Maxie is overconfident in his own abilities, and is slow to learn from his mistakes, forever trusting that his strength and relative invulnerability are more than enough. He avoids using his ability to absorb powers and memories as best as he can, preferring to rely on physical superiority to solve any of his problems. As for the intellectual ones, he just tries his best!

Given the nature of his destructive powers and the extent of his training in using them, Maxie is accustomed to fighting with the bare minimum available to him at any given time. While he often isn't even aware of his own subconscious disrobing, it has been raised, repeatedly, as a problem he has to work on.

✦ THE RIKTI WAR ✦
Maxwell Hooks should have died like all the rest.

During the Rikti War he was known as the hero Fatebreaker, a roguish champion of the occult who worked in tandem with the Midnight Squad in the early days of the war. With his incredible durability and reputation as a protector of magical secrets and those who work with them, he was the figurehead in several successful skirmishes with the Rikti.

But the aliens were cunning. They had deduced that Fatebreaker's powers were derived from a single location on his body: that touch that was so devastating to them, as they found their own psionic powers turned against them in an instant. It was through those powers that they were able to form a feeback link with his mind, which was already beginning to buckle under the weight of their alien consciousness.

When the Rikti pushed back against the Midnight Squad, they took advantage of the vulnerability in Fatebreaker's mind. As he absorbed the energy of their plasma blasts to protect the other magicians, the self-restraint in his mind was flipped on its head; his limits, then, had become known to at least a few. He absorbed too much, too quickly, and with his mind swimming in alien thoughts he unleashed enough power to disintegrate the front lines on both sides.

The survivors of that battle were forced to watch as one final blast from a Rikti tank reduced his body to a skeleton, and to all the heroes of Paragon City, Fatebreaker died on that day.

As the city began to recover in the aftermath of the war, a single skeleton could hardly be considered exceptional, and even the magicians in the Midnight Squad scarcely had any idea that Fatebreaker was somehow connected to the Netherworld. It was through the rogue efforts of those few scientists from Crey Industries that his full potential was realized.

The Rikti weapons had somehow halted Fatebreaker's regenerative abilities long enough that the strange skeleton recovered among the ruins had remained inert, at least long enough that the geneticists from Crey were able to put it on ice when they detected the strange lifeforms that were growing around it. While they had little means to decipher the cryptic language inscribed upon its left hand, it did call for an experiment.

The skeleton was removed from containment and placed in an isolated chamber that allowed for the control of temperature and other environmental factors. Within only seconds, the scientists found that they were no longer observing a strange skeleton, but a fully-formed man.

Bereft of all memories of his former life, the man was effectively a blank slate, and a viable candidate for psychic conditioning and placement in one of Crey's many subsidiary programs. In the aftermath of the war and with the damage it did to the Midnight Squad, it proved a simple task for the megacorporation to erase all evidence of Fatebreaker's existence; they would replace it instead with their own, a hero by the name of Lifetap, whose ability to steal the powers of other beings would prove invaluable to their experiments.

So long as they could control him and his rebellious nature, at least...

Maxie's powers are linked to the Sepulcher of Twilight located in the Netherworld, a vault of stolen life force found at the very bottom of a multi-dimensional drain of vital energy. Grafted onto the left hand of his skeleton is the runic Ex Nihilo, which he has come to refer to as the Left Hand of Darkness. It is through this vital script that all of his powers function, serving as an open conduit to the Netherworld. The flesh of his left hand is capable of absorbing the energy of any living organic being that he touches, stealing its power for himself in the process. Skin-to-skin contact must be made for the absorption to be successful, and most beings are rendered unconscious by its effect. Maxie's use of this power is involuntary; the touch of his left hand will always drain an organic being, whether he likes it or not.

Maxie can steal virtually any power, including psionic powers, although he isn't guaranteed to know how to use them effectively. When he absorbs the energy of a living being in this way, he also absorbs their psyche, giving him a glimpse into their memories and allowing him to understand how to control their powers. There is always a risk of the absorbed personality overwhelming him, as some dominant psyches can subvert his own. The transfer of power is only temporary, and lasts for a duration based on how long he maintains contact. When the effect ends, Maxie loses access to the memories of the drained psyche. He can absorb the powers and psyches of multiple beings at one time, which can be disorienting for him.

In addition to stealing the energy of organic beings, the touch of his left hand is sufficient to absorb other forms of energy, such as arcs of electricity or blasts of fire, and is capable of absorbing and dispelling even magical forces. Consequentially, this allows certain dimensional entities to take up residence in his mind; ill-advised at even the best of times.

• Nullification •
Maxie's left hand can disintegrate inorganic matter, making it difficult for living beings to avoid his touch completely through armor alone. He has some degree of control over this ability, ostensibly used by channeling negative energy from the Netherworld; when complex psyches and his own powers overwhelm him, negative energy usually manifests in an aura that destroys all inorganic matter around him.

• Immortality •
As long as he is connected to a source of life energy, Maxie is functionally immortal. Because he is powered by his link to the Sepulcher, he does not age, and is immune to disease and infection. This same energy sustains his biological processes, allowing him to survive without food, water, or oxygen. Maxie can still be killed, but his skeleton has so far proven to be impervious to all forms of harm; he will eventually reconstitute from ambient life energy, but his memories are often damaged in the process.

• Flight •
Maxie is able to fly through the air at great speeds (exceeding 500 MPH) by channeling the ambient energy around him into an electromagnetic field. This process is completely involuntary; he just knows that it works.

While Maxie is connected to a source of life energy, he is powered far beyond the limitations of a normal human being.

• Super Strength •
Maxie possesses immense superhuman strength, the limits of which aren't completely known. When fully saturated with life energy, he is able to punch through an Arachnos Flier with relative ease.

• Super Speed •
Maxie can run and move at speeds that are beyond the limits of the the best human athletes.

• Super Stamina •
As long as he is connected to a source of life energy, Maxie's body is tireless and immune to fatigue.

• Super Durability •
The occult materials that make up Maxie's body are far more resistant to injury than the bodily tissues of a normal human. Maxie is highly resistant to penetration wounds, and can withstand tremendous impact forces, able to go toe-to-toe with other superhumanly strong opponents without being hurt.

Because Maxie's powers are derived from his left hand, anything that can restrict his use of it also restricts the powers he can bring to bear. Given the nature of his skeleton, it has so far been impossible to sever the hand completely, and magical forces cannot affect it directly, but indirect means often prove very effective.

• Synthetic Beings •
Maxie cannot absorb the energy of entirely synthetic beings like robots, and cyborgs and other techno-organic beings have some degree of immunity to the effects of his touch.

• Feedback •
Powerful beings can withstand Maxie's touch and overwhelm his mind and body in a feedback loop, either causing him immense pain or imposing their own will upon him.

• Cold •
Maxie's powers are less effective in extremely cold temperatures. His regenerative abilities are slowed in these environments, which at their peak can even halt the reconstitution of his body.

• Unlucky •
Because Maxie's powers are involuntary, it has been theorized that he passively absorbs even his own good fortune, leaving him perpetually on the wrong side of probability.