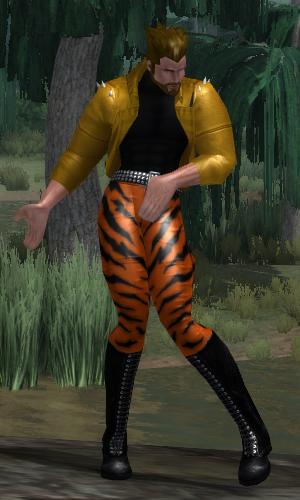 Ryan Price became a worldwide sensation overnight after making headlines for an impromptu, highly controversial performance he gave at a Miami nightclub called Lion Sweat in his late teens. When the club’s normal DJ inexplicably disappeared, the manager was left desperate to find a replacement act. Ryan stepped up offering to fill in, and the manager took a gamble by letting him go for it, giving Ryan the platform to publicly debut his music to the world for the first time. His high-intensity beats attracted a horde of wild animals and incited a riot, which ultimately led to the destruction of the venue. The entire ordeal ended up being covered by media outlets across the globe in the next morning’s news cycle, and the songs performed that night were later released online as an independently-produced mixtape called Fight or Flight under the name alias Wild Streak, officially launching his musical career.

Wild Streak’s chaotic brand of entertainment attracted a loyal following of rebellious fans who enabled his outrageous antics. In the months following Fight or Flight’s release, news would also come out that the DJ who was supposed to perform that night was found dead in his home by police, seemingly strangled by his own pet snake, which had somehow escaped its confinement while he slept. Ryan would eventually be arrested for the DJ’s murder after brazenly admitting to orchestrating it while railing cocaine on a Snapchat livestream about a year after it all went down.

Ryan was denied bail, forcing him to remain in prison until his case was allowed to go to trial. From behind bars, he somehow produced his second mixtape, aptly titled Can’t Be Caged, which he released without warning the night before his trial was supposed to happen. The hype surrounding this, combined with his ultimate acquittal due to insufficient evidence linking him to the crime he was accused of, put him on the radar of the music industry’s biggest names. He was released from incarceration into the world with more success and fame than he had going into the system.

Eager to both capitalize on his new fame, and celebrate his release, Ryan began his first nationwide tour. Rather than book normal performance venues like concert halls and stages, the Wild Streak tour touched down at various zoos in major cities around the country. Each concert would end with Wild Streak releasing all of the zoos’ animals from their cages into the wild; naturally, after the first few cities, most zoos started refusing him entry out of self preservation. This didn’t stop Ryan and his hordes of fans from breaking in and continuing the tour illegally anyway, even in the face of police resistance. The events surrounding the Can’t Be Caged tour cemented Wild Streak’s status in popular culture as an anti-authority anarchist that many regarded as a menace to society. Ryan’s complete disregard for the potential consequences of his actions made him an icon, and the chaos in his wake helped him evade capture from federal authorities throughout the entire ordeal. When the tour ended, Ryan fled the United States to live a life on the run, effectively going dark to his fans for months.

While rampaging around South America in a binge of hedonistic debauchery, Ryan’s notoriety helped him get connected with a record label that had strong ties to organized crime, eventually giving him a formal introduction to the international drug trade. Wild Streak came back from hiatus with his first studio-produced project with this criminal label called King of the Jungle, which today is considered by many fans to be his magnum opus. The tour for this album allowed Ryan’s label to start using his concerts as a mass distribution network for narcotics, able to easily cross borders on a regular basis. Ryan inevitably found himself drowning in money and power in a way that he’d previously only dreamt of, which he immediately funneled into advancing his music career. By working with some of the world’s best entertainment lawyers, he was able to clear his name in the United States, eventually allowing him to re-enter the country as a free man.

Though his fans were remarkably obsessed with the larger-than-life, narcissistic persona that he adopted during this time period, Wild Streak continued to garner the ire of old-fashioned critics for being what many cite as one of the biggest signs of cultural decline in the United States today. Regardless of how valid that criticism may be, Ryan undeniably thrived on being the center of controversy, outshining other artists whose freshman albums debuted at the same time as his with sheer celebrity power alone.

Riding the massive wave of success after King of the Jungle, Ryan capitalized on the new level of fame by signing a deal for producing a new MTV reality program called Mating Season, which documented Wild Streak’s search for genuine springtime romance in a world full of gold-diggers and bloodthirsty wolves. The show unsurprisingly captivated his fans, as it gave people new insight into the unusual lifestyle of America’s wildest entertainer. Each weekly episode also featured a new song created from audio recorded with the various men he’d date each week, ending the season with a full album released under the same title of Mating Season that collected all of these songs together.

The mixed public reception to Mating Season sent Ryan into a depression spiral that saw his uninhibited drug use ramp up out of control. He finally hit rock bottom after overdosing on heroin on stage during a European tour. His record label, afraid of being raided by the federal government, dropped their contract with Wild Streak to protect themselves after Ryan's fall from grace hit mainstream media, leaving him abandoned and helpless during one of the most trying times in his life. It was at that moment, when he had nowhere else to go, that members of a mutant advocacy group called the Dragon's Den found him. They offered him a community that could keep him away from the public eye during his recovery, which is when he took the time to independently write and produce an album about his experience with addiction called Chasing the Dragon.

While most people expected Chasing the Dragon to be a serious warning against drug use, it was very much the opposite of that. According to a few tracks on the project, he believes his brush with death to have been one of the wildest rides of his life, confirming that he'll definitely do it again now that powerful mutants like the Dragons are on his side to keep him - and all the weirdos and freaks just like him - safe from actual harm. Critics panned its influence on young adults worldwide, even going as far to place public blame on him for an increase in drug-related emergency incidents in the period following the album's release. No charges have officially been able to stick on Ryan because of it largely due to legal protection provided to him by the Dragon's Den.

Dragon's Den:
Without the Dragon's Den, it's possible Ryan's overdose could have ended his career. Thus, Ryan feels personally indebted to them, and uses his large platform to bring the organization's pro-mutant activism into the public spotlight. A cut of the profits Ryan makes selling drugs at his concerts goes to the Dragon's Den under the table because they hooked him up with the purest drugs on the market during his recovery stint.

The Vanquishers:
After the Vanquishers shipped a family of superpowered tigers to a shady illegal trafficker guising themselves as a rescue who turned out to be the evil mercenary Guerilla, Wild Streak called them out on social media, demanding they help him rescue them for real. Once the tigers were in Ryan's custody, he turned on the Vanquishers... and then followed up their fight by dropping one of his biggest tracks, called "Fuck The Vanqs". He makes a point to take jabs at the Vanquishers whenever possible, even going so far as to try claiming a bounty that was placed on them at one point. He'll never forgive them for trafficking his homies.

Startup:
Ryan struggled to find something in common with Startup for quite some time while he was at the Dragon's Den until Startup offered his hand setting up visuals for his Chasing the Dragon tour. Startup ended up creating advanced, hyper-realistic holograms that made Wild Streak's light game for his shows win all kinds of recognition from industry insiders.

Woodsmoke:
Woodsmoke is always game for a good rager, which makes him super cool as far as Ryan's concerned. Whenever Ryan needs to blow off some steam, destroying shit with Woody is always on the table.

Tough Guy:
Tough Guy is super intense, but not in a fun, chill way, which makes him someone Ryan tries to avoid. It's not that they don't get along - they do - but the dude acts like he's always got something to prove and Ryan finds it exhausting.

Swamped:
Wild Streak and Swamped are two of the closest members of the Dragon's Den. Both of them are free spirits and nature advocates, though they approach both of those things from different angles. Swamped also grows the plants that become the extremely pure drugs that Wild Streak sells at his shows.

Mosquito:
What good is there to say about Mosquito? He's straight up disgusting. That said, Wild Streak tolerates him because he can slip inside people's bloodstreams to neutralize the effects of drugs when they overdose. Ryan takes advantage of this more than he'd like to admit.

Frightling:
Ryan sympathizes with Roman quite a bit. They both transform into monsters, which helped them strike a sort of kinship, although Ryan never loses himself in the transformation like Roman does. The Frightling, Roman's monstrous half, is really fucked up. Sometimes it's a bit much but Ryan tries not to judge.

Judas:
Judas' performance style with V.E.K.T.O.R. was a huge inspiration for Wild Streak's entire act. The chaos, the violence, and the rock and roll... it's a huge part of why Ryan wanted to break into music in the first place. Now that Ryan's big on his own, he's had a chance to jam out and party with Judas, which was like a dream come true. He wants to go on tour with him soon.

Guerilla:
A bastard who experiments on animals for reasons that don't matter. Wild Streak is always going after this crazy ape, trying to stop his gene-splicing nonsense from getting too out of control. He has been known to liberate members of Guerilla's army, recruiting them into his own entourage.