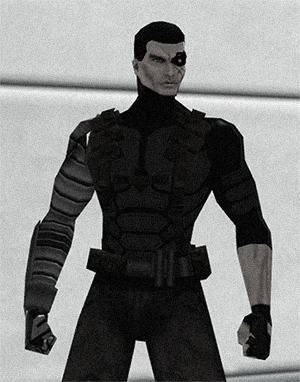 "IT'S MY GUN, BUT I'M WILLING TO SHARE THE BULLETS."

Born to an abusive father and a mother too afraid to leave him, REDACTED always felt he was destined for greater things. But the rut he was born into was deep. Deep enough to make him doubt himself and his potential.

A man with a serious gambling addiction, REDACTED's father refused to face facts and own up to his mistakes, blaming everyone else for the pitfalls in his life, and the decisions he made that brought them about. The only times REDACTED and his mother were even the tiniest bit happy were when his father was away at the casino gambling. But when he'd lose, the peace they felt was short-lived. He'd win, then lose, then win, then lose some more and when he'd return home with less money in his pocket than he'd had at the start of the day, he'd take his frustrations out on REDACTED and his mother.

The strain on the family his father's troubles caused came to a head shortly after REDACTED's sixteenth birthday when his father, having lost big, returned home drunk and even more angrier to usual. For the first time, REDACTED fought back. The struggle between the two ended with REDACTED striking his father in the back of the head with an aluminum baseball bat. He kept swinging and when he was done he couldn't lift his arms. He and his mother buried the body in the back yard and since his father was the type of guy no one liked, no one came around asking about him. Finally free of him, REDACTED and his mother finally gained some sense of peace.

But even though he was an animal, REDACTED's father's occasional windfall kept the family fed and without it... well they struggled to pay the bills. REDACTED felt it again. The rut. It was getting deeper. Desperate, REDACTED took whatever work came his way - construction, delivering groceries, eventually turning to more illicit activities. Unable to watch her son fall into the same hole her husband had, REDACTED's mother demanded he leave St. Martial and enlist in the military. With little choice in the matter REDACTED obliged.

To say he excelled would be an understatement. REDACTED took to military life like a duck takes to water. He'd never felt more at home doing anything else. As a natural born fighter, his determination and grit served him well as he quickly climbed the ranks with minimal effort.

Years passed. He fought in numerous engagements and was the only survivor (from both sides) of an assault in Iraq and for his heroism in the line of duty, he was decorated with the Medal of Honor and a Silver Star. Midway through his second tour, REDACTED was informed his mother had contracted brain cancer and he subsequently took leave to care for her up right up until the end. He finished out his tour and decided not to re-enlist, having grown tired of war. Like many veterans, REDACTED had trouble re-adjusting to civilian life. He found it hard holding down a regular job and frequently found himself out of both work and money.

And then he was approached by a mysterious man. A man who claimed he could put his talents to work defending America from super-powered threats on the homefront. That man was a recruiter for the Malta Group, a high-tech paramilitary force divided into clandestine cells and dispersed around the globe. REDACTED readily agreed.

He regretted the decision almost immediately. Clandestine operations, black helicopters, and faceless, anonymous overseers. None of it sat well with REDACTED. But it wasn't the type of job that let you just walk away. So he purposefully botched a mission and faked his death.

He was Clyde Morgan now.

He returned home to his native St. Martial and decided to become his own boss. He took up mercenary work and began regularly carrying out assassinations for Paolo Marcone and his leg of The Family, garnering a reputation as an extremely proficient and reliable fixer. A reputation that did not go unnoticed. A young and hungry rival hitman named Andre Lara coveted Morgan's spot as the Marcone's go-to assassin. He framed Clyde as a rat, making it seem as if he was operating as an informant with the PCPD. Paolo and the rest of the Marcone family confronted Clyde about his supposed betrayal. He adamantly denied working with the feds but unfortunately, Paolo was unconvinced. Clyde was brutally beaten and tortured for several hours, which ended with Paolo and his men severing Clyde's right arm with a hacksaw and throwing him into Independence Port.

A lesser man would've had accepted his fate, but not Clyde. He struggled to stay alive and summoned all the strength he had left to crawl ashore, jerry-rig a tourniquet for his stub out of fishing wire he found on the docks, and slowly made his way to an old acquaintance. A grizzled medic he served with overseas who'd become an underworld surgeon of sorts, the doctor tended to his wounds as best he could. In the weeks to come, Clyde became extremely frustrated with his newfound handicap and the fact that he was now unable to perform as proficiently as he had before. He demanded the doctor fix him. He fitted Clyde with a high-tech, cybernetic prosthetic that could project super-heated plasma. Swearing revenge on his former employers, Clyde methodically eliminated every single member of the Marcone crime family, including Andre Lara, whom he saved for last.

With his thirst for revenge sated, Clyde's returned to doing what he does best. 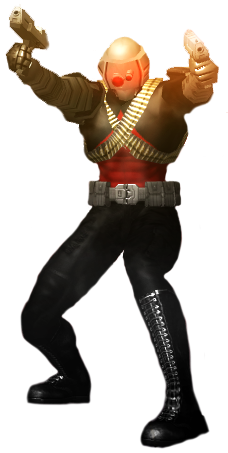 ● Plasma Projection With a thought, Clyde is able to expel super-heated plasma from the fingertips, the palm, or the grating of his cybernetic arm. The temperature of the flames can reach up to 2500°F, which is hot enough to melt steel.
● Superhuman Strength: Highly advanced hydraulics built into his arm allow Clyde to lift at least one ton with minimal effort.
● Superhuman Reflexes: Linked directly to his brain stem, the speed at which his brain sends signals to the prosthetic is several hundred times faster than that of an ordinary person's, boosting his reflexes and coordination to superhuman levels.

Weapons Master: As an authority on modern warfare, Firearm is a recipient of multi-disciplinary military knowledge from the United States Armed Forces. Thanks to this and continued training, he is a master of many weapons, favoring handheld pistols and knives. Firearm's ever-changing arsenal of weaponry includes various automatic and semiautomatic rifles, and an array of handguns, fragmentation and tear gas grenades, other explosives, and combat knives.

● Master Marksman: Firearm is a skilled sharpshooter and exceptional marksman with many types of firearms, and rarely misses his target. Trained as an elite sniper, he's skilled enough to hit a target from 4 km. He became ambidextrous once he gained his prosthetic arm as well. He is skilled in knife throwing as well.

Combat Training: Firearm is a thoroughly seasoned veteran in multiple forms of armed and unarmed combat. He is highly adept in Boxing, Krav Maga, Jujitsu, and kickboxing.