Theodora Faust wasn't born with powers; she wasn't a mutant or naturally gifted; she didn't have an aptitude for technology or a mind for science. What she did have, though? Was curiosity.

Even as a young child, Theo always had her nose in places it didn't belong. Often times she'd get into trouble by proxy of hanging out with her friends, Rem and Alex (also nearby neighbors and cohorts in mischief,) and the three of them got in over their heads more than once.

Feeling powerless and wanting power are not inherently hand-in-hand, but when you want to protect what you love you start to look desperately for something to help you be more. 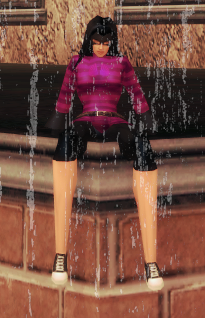 It wasn't long before an angry teen girl turned into a young vigilante in a home-made costume — mostly thrifted from stores around Paragon — trying to stop crime where she could. Her first few outings were about as successful as one would think of a girl with only cheerleading under her belt as a physical skill and no powers to speak of; she was trounced. With bruises hidden beneath leggings and deft application of cover-ups, Theo was able to keep most of that a secret, but it was only a matter of time before something had to give.


Repeatedly delving into texts in the library at school led to nothing, and her penchant for curiosity led her to a shop in Brickstown with massive stacks of magical texts tucked against each wall and bookcases overflowing with more information than she could have ever hoped for. Nothing about gaining power, but applications of magical power she could use... if she had any. Poring over these books left her feeling defeated in some ways, but energized in others. Each Latin word spoken aloud or in her mind seemed to draw on something deep inside of her soul, a power she hadn't known and couldn't access that was inherently hers; a natural adept with access to a flood of magical power, something was awakened in Theo in those days that she wouldn't know fully until much later.

They say she's made of magic and that her power is beyond measure. You should trust her, she's a hero... If only trust were simple...

With great power comes... blah blah blah, we all know the story. Manifesting the power she had inherently and using it in a way that felt responsible might have seemed like a feat beyond a girl so angry; at herself, at the world for letting things happen to good people, and mostly just because being a teenager sucked. It took practice and time, and it took a couple of years of her running out on her own and getting into trouble — manipulating space and time in ways that could only be read as chaotic manifestations of an unhinged spirit — and leaving behind a wake of misfortune to get her head on straight. It took... a team to make a difference.


When first meeting Valiant and Marathon in their heroic personas, none of them seemed to know who the other were. All out in the world with new powers and trying to make a difference just fresh out of college and struggling to find themselves. It was hard to keep her secret life from her friends, especially with her and Rem having been dating for so long, but she felt it was safest for them... her anger at their situation was hers to deal with and hers alone.

It wasn't long before the secret came out, all of them ending up in a bit of a tiff when they found out, and learning only then that working together was the best way to be... and so they decided to be better — to train harder and become more than what they were told they could be... to become Marvels

Pretty as a picture and bold enough to tell you so...