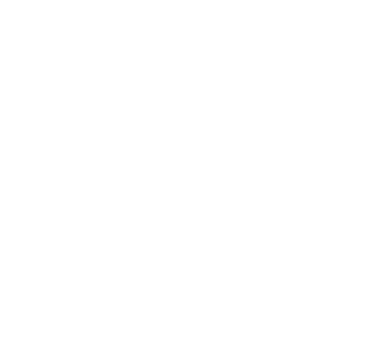 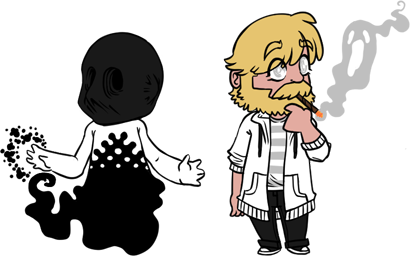 Directionless slacker Ethan Holloway was dead and long at rest until a mad scientist brought him back to life against his will, trapping him in a state between life and death, unwittingly giving him strange power over both forces in the process. When he's not fighting alongside his teammates in the world-renown Vanquishers to save the world, he's usually helping spirits make their way to the afterlife and protecting the living world from the dead alongside his buddy Haros. His lack of seriousness is seen by his therapist as a coping mechanism for the horrors he experiences constantly dealing with death. 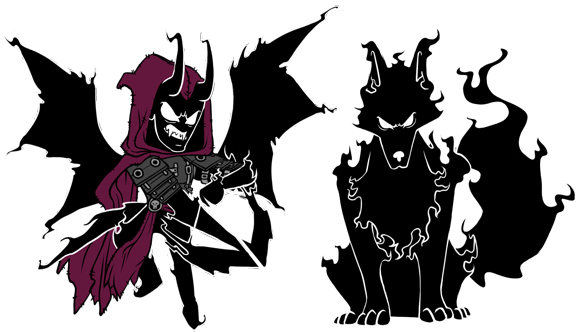 In ancient mythology, Haros was known as the unsettling deity responsible for carrying souls across the river Styx into Hades, but the ancient days were a long time ago. Seeking to make a life for himself away from his pantheon after a lifetime in service to them, Haros has been living as a nomad in the underworld, protecting lost souls there from the horrors that lurk between hell dimensions, helping them find the realms where they belong. As angsty and monstrous as he is, he seems to be one of the few gods who actually cares for humanity, which is why he now works alongside Limbo to protect people from the realm of the dead. 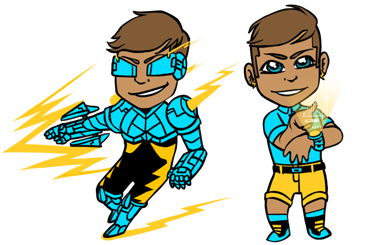 Young CEO and inventor/entrepreneur Dustin Holmes of the multi-billionaire Holmes estate used his inheritance to start up the Fritz Foundation, a corporation dedicated to creating the technology he uses as a high-profile vigilante and social media influencer. His ego is massive and he looks down on almost everyone, so he frequently finds himself at odds with his allies in the Neverenders when his quest for fame gets out of hand. Dustin specializes in sabotaging and destroying dangerous technology that winds up in the hands of bad people. Videos of most of his exploits end up on YouTube.

Hailing from the afterlife paradise realm of Elysium, the angelic Raziel, All-High Guardian of Genesis and Enforcer of Elysium (yes, that is his full name) is one of his people's most formidable warriors despite being the youngest among them. Raz was chosen to fight alongside the newly reformed Neverenders on Earth using the magical force of creation called Genesis flowing through him. He genuinely loves humanity with his entire being and would gladly give his life to protect anyone in need of his help, especially his friends. He looks at life with a sort of childlike wonder that makes him absurdly naive despite being centuries old. 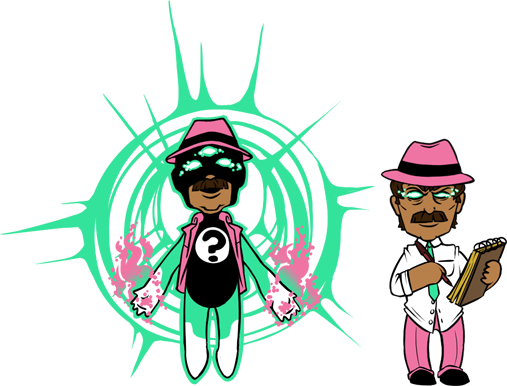 Mystery
The Light of Truth

Investigative journalist Mateo 'Matty' Ortega had no concept of the world of magic hiding in society just below the surface until a story led him deep into the fringes where a curse was placed upon him, forcing him to see truth wherever he looks and compelling it to share it, often alienating those around him. With the horrifying truths of reality revealed to him, Matty has made it his mission to expose everything he finds on his independent news blog called Truth Matters. He can be a bit eccentric and obsessive; he often fixates on the threads of truth that appear in his pursuit of the story. His ability to see through magic and illusions makes him an undeniably useful ally. 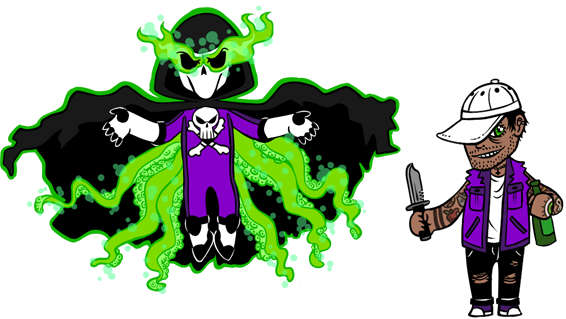 Back when Roman Vita was a young child, he was terrorized by a recurring nightmare of a horrible creature he called the Frightling. In time, the Frightling would catch Roman and permanently latch itself onto his psyche like a parasite, emerging as a secondary personality with immense psychic power that takes over Roman's body when he sleeps. A lifetime spent in and out of institutions has taught Roman that there's no point in resisting the creature, so he lives in total servitude to the monster inside his head. When he's allowed to be awake, Roman is a hedonistic wanderer, only regularly sticking around with the Hazards, a gang of criminals he met in the Rogue Isles.

Airwave
The Master of Information

Amnesty
The Shadow of Justice

Avalanche
The Aspect of Ice

Kaboom
The Aspect of Fire

Magnet
The Spark of Attraction

Mr. Snowman
The Dead of Winter

Other
The Eldritch Horror

Terraform
The Shaper of Worlds

Zero Chill
The Freezer of Time

The Vanquishers
The Neverenders
The Hazards