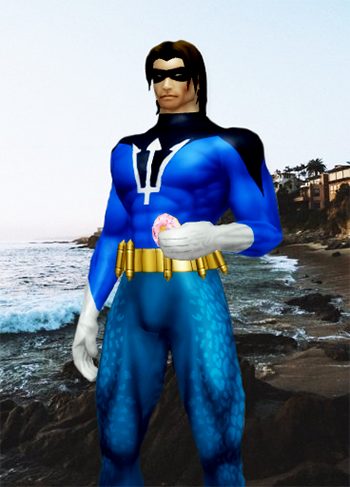 To escape from an abusive father and an alcoholic mother, Eric William Callahan ran off to join the Navy as soon as he turned eighteen. A few of his fellow high school graduates signed on as well, but for entirely different reasons. Where they were eager to serve their country, Eric joined just to get away from everything. He almost landed a baseball scholarship, but failed to maintain a high enough grade point average. So he figured it was the next best course of action, as he possessed no other noteworthy skills to speak of and any more time spent in the same zipcode as his dysfunctional parents would eventually drive him insane.

Gabrielle Ola was a chatty young surfer girl from Hawaii. The middle child between two brothers, Gabby's well-off father fawned over his only daughter and she wanted for nothing. She and Eric met while he was on shore leave. She saved him from being beaten up by a gang of surf nazis who didn't take kindly to outsiders on their portion of the beach. 'Locals only' and all that. The two just hit it off. Where he was headstrong and stubborn, she was fun-loving and free. A bit of a hippie even, he teased her. Gabrielle promised to wait for him as he left to finish his tour. And wait she did. Six months later the two reunited like no time had passed at all. The two returned to Eric's hometown of Port Harbor, Seattle and settled down.

A year later they married. A year and a half later, Calvin Callahan was brought into the world. Normal by any stretch of the imagination, it was determined early on that he was very much his father's son, excelling in all things physical. Whether it was t-ball in first grade, little league in middle school, or football in high school. Though Calvin always felt a certain connection with the ocean, in particular. His mother told him he must have inherited her passion for surfing and being out in the water in general. But somehow, deep down inside, even as a kid he knew it was more than that.

His abilities first manifested when he was ten, on a trip with a friend to his uncle's beach house. When his friend was pulled beneath the surface by undertow, Calvin instinctively dove in to save him. Sinking deeper, Cal's mutation kicked in. Gills sprouted behind his ears, and he felt re-energized as the water flowed around him. He quickly swam to shore, hauling his friend on his back like a sack of potatoes. He made a full recovery. The rescue even made the local papers.

Calvin spent the next few years learning about and honing his new found superpowers. He found he could breathe normally underwater just as well as he could above water. He was able to swim at incredibly high speeds and gained enhanced strength as well, the only downside being that he felt weakened the longer he went without coming into contact with water.

When he entered high school he didn't hesitate to try out for the swim team. With a leg up on the competion, Cal easily made it, shamelessly flaunting his abilities. He enjoyed the star-status that came with dominating the competition. Your stereotypical jock, Cal was often surrounded by a group of adoring fans (mainly consisting of giggling girls), Cal floated through high school, carefree.

Outshining most of his teammates, Cal became Port Harbor High's golden boy, earning him the ire of fellow teammate Abram Maddox. Jealous of Calvin's success, Abram immediately assumed he'd been using steroids. No one swam that fast naturally. So he spread the rumor. With Calvin showing off so unabashedly, it wasn't much of a leap for everyone else to believe it. After Calvin refused to undergo a drug test for fear of being revealed as a mutant, he was kicked off the swim team. Everyone believed he must've been guilty. Abram was ecstatic. Kicked off the team a mere month before graduation, Cal's college scholarship plans evaporated. He enrolled in a few classes at a local community college.

Cal suddenly found himself surrounded by his much smarter peers; the very people he made fun of in high school. Three months after he enrolled, Cal came across a kid being bullied. He fought the older kids off using his newfound strength. After they ran away, the boy assumed Calvin to be a superhero and thanked him before he ran home. Mulling the idea over in his head, Cal created a crude costume consisting of a wet-suit, swim-goggles, and a beach-towel. Cal achieved minimal success on his first few outings as honestly, there really wasn't a great deal of crime in Port Harbor. For the most part the majority of the town's citizens were pretty wealthy. But when the town was threatened by a mutated and sentient killer whale, Calvin knew his time to shine had come. Though he defeated the monster, he suffered numerous scrapes and bruises (Which he explained to his parents were coral burns from surfing).

Though an up-and-coming superhero, Calvin was still a college student, albeit one who regularly clashed with super-powered menaces. Cal tried to conceal his dual identity from most of the locals at first, though this soon proved futile after a super-villain, named The Reefer, much to Cal's great amusement, attacked him while at college, in an attempt to reveal Calvin's status as a mutant. Calvin easily overpowered The Reefer, single-handedly saving the students. Though The Reefer succeeded in outing Calvin as a superhero, instead of being branded a freak, Cal was hailed as a hero. Looking to take advantage of his new powers, Cal became the totally tubular superhero known as Wipeout.

As one of the few superheroes based on the west coast, Cal garnered considerable recognition. He was approached by loads of different companies, eager to use him as their personal billboard. The deal was Cal would make appearances at certain parties and scheduled events in exchange for cash and free stuff. Cal signed the contracts and that was it; Wipeout was officially a brand name. With a "perfect bone structure", Cal branched out into modeling as well as acting as a spokesperson. The world was his oyster.

Looking smooth and slick in free schwag, Cal began spending the majority of his time showing up at sponsored events and promoting different company's products rather than saving lives and fighting crime. He loved the attention, but constantly being told to smile like an idiot while holding some product wore thin after a few years. Not everyone embraced him either. Wipeout-hating tweets and blogs began popping up, branding Calvin as a "fad" and a "sellout". He was voted the "Most Overrated Celebrity" on the west coast in a poll conducted by the Associated Press. Cal got sick of the negative attention and the hassle of it all, and so after his contracts were up, he didn't renew any and took a vacation.

Cal went back to his roots and did a little soul searching after that. Now twenty-one years old, he bought a tricked out VW camper before he donated the majority of his wealth to charity. He cruised down the west coast, living the American dream for a while, also fighting a host of different super-powered foes. His list of enemies grew as he staved off threats like Brainwash, The Everywhere Man, and Killer Wave. He also fought sea-based, non-superpowered criminals, including modern-day pirates, as well as various threats to aquatic life such as poachers and oil polluters. He took up surfing and skating again and gained serious recognition as a naturally gifted athlete in the sports. Back then, he would've argued that he was attempting to "lay low" and stay off the radar after gaining so much attention at such a young age. But as much as he might have denied it, Cal did love being the center of attention and as much as he tried, he just couldn't stay out of the limelight. And so, in 2009, Cal moved east to Paragon City, bought a swanky beach house in Talos Island and resumed his super-heroic endeavors.

Calvin's primary power is the ability to control and manipulate water in all its forms. The most commonly used application of this ability is launching blasts of water, delivering great shock waves of pure force. He can heighten a stream's pressure to which it is high enough to bend steel. Cal can redirect the flow of water, create whirlpools and tidal waves in large bodies of water, create currents and even increase surface tension to the point where it is firm enough to stand upon.

Cal is able to manipulate the properties of water under his control as well, such as increasing or decreasing the temperature. He can cause water to harden to ice and form shields strong enough to deflect shards of glass. He has also created "hard water" constructs such as lashes and whips.

Cal does need water to manipulate; he cannot create it.

Calvin can swim at speeds of 70 knots (or 80 MPH), and can run slightly faster than the average human.

Calvin possesses a telepathic rapport with all forms of marine life. He can't hold conversations but he can redirect the thought processes of their brains to compel them into helping him when he needs it.

Cal is able to survive and adapt to underwater environments, being able to breathe indefinitely and endure high water pressure and extreme temperatures. As such, Cal's body is also highly resistant to physical injury. But he's not bulletproof. More like, bullet-resistant.

As a kid, Cal promised himself he'd never ever end up being stuck behind a desk all day. Cal enjoys being out in the world, doing stuff. Fully entrenched in the surfing scene, Cal's pretty well known in the sport, but no one knows he moonlights as a superhero. He's a fun-loving guy who has a weak-spot for the ladies. He likes to show-off, and does everything with an over-abundance of style and recklessness. Throughout it all Calvin grew into a happy-go-lucky beacon of mischief, tom-foolery, and daredevilry. He surfs because, to him, it is the ultimate celebration of everything that is good in life. He means no harm, but inevitably leaves in his wake destroyed furniture, hefty tabs, and demented dudes unable to stop their girls from falling all over the oblivious-to-it-all Calvin Callahan.