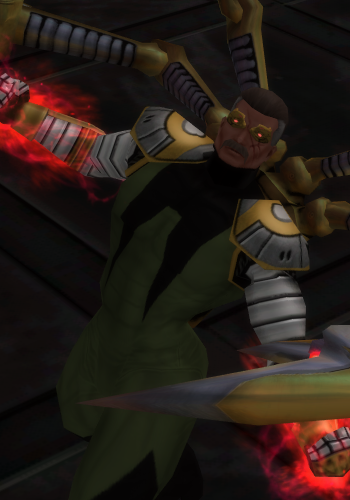 Bishop Weaver and Rook Pavuk first met each other their freshman year at Stanford. They were assigned as roommates, and they hit it off immediately. Among the rest of their class they quickly became known as the Chess Boys because of their matching names and their tendency to outsmart everyone else in their coursework. The two of them would become competitive rivals and the best of friends, and they dominated everything they participated in together. Anytime one had an idea, the other would encourage them to see it through completely, and they were constantly trying to one-up their previous escapades whenever given a chance.

Towards the end of that first year, the Chess Boys whipped up a bare-boned website called Blackbook that was meant to give students a place where they could exchange favors for each other in return for help on schoolwork. A couple of small hacks into school systems gave Blackbook access to coursework materials, including copies of testing documents, for all members. Naturally, it was used to facilitate a massive cheating ring among thousands of Stanford students for months before anyone got caught. The site was highly secured and invite-only. All of its members were verified individually so that nobody could get in without permission, ensuring that school administration or anyone untrustworthy wouldn’t be able to get in.

Unfortunately, these precautions would only help as long as nobody got caught on the website in-person, which inevitably happened and led authorities straight to Rook and Bishop. When news broke of their swift expulsion from Stanford after the highly publicized hearing over the incident, they started getting offers from major technological firms to develop Blackbook into a service for more than just students. Crime, it turned out, paid quite well. All of the sudden, the prospects of university seemed small compared to what people were offering them to maintain a space on the dark web for people to exchange goods and services with privacy. Expulsion was clearly not going to get in the way of the boys’ success.

Around the same time that they were hired by private investors, Bishop and Rook’s relationship evolved into something more than simply college roommates or even business partners. During celebrations held over their shared success, they drunkenly slept with one another, starting a passionate romantic relationship that only heightened the intensity of their rivalry. Bishop and Rook felt like they'd conquered the world. Together, they seemed unstoppable.

Their relationship was put to the test once they started getting offers from parties interested in perusing Blackbook’s consumer data. At the time, the data was treated as more of a byproduct of using Blackbook than anything valuable on its own, but the requests they were getting made them look at it in a different light. In Bishop’s eyes, user data was the key to acquiring a new kind of power the world hadn’t yet seen before. There was value inherent in knowing hard data on people’s habits, especially in the criminal underworld. In Rook’s eyes, however, collecting user data at all became something he would take a moral hardline stance against. After all, how could clientele trust Blackbook while knowing everything they do is being tracked? Rook argued that doing that and then selling the information to third parties would be the death of the service.

The problem, at least Bishop thought, was that Rook was thinking too small. Third parties expressed interest because the information is valuable. Why give that up? Why not, Bishop retorted, use that data for themselves to carve out a throne of their own at the top of the criminal empire that was forming up beneath them? Blackbook could give them the information they needed to manipulate all the biggest players into doing whatever they want. Limitless potential was at their fingertips, but Bishop didn’t know how to get Rook to see it.

The answer, of course, was a new scheme to top all the others. Using the compiled user data to identify the perfect places to apply pressure on a few key targets via blackmail, Bishop was able to secretly commission the construction of a massive skyscraper in Tokyo, a city Rook always fantasized about spending time in. It was a large, obsidian tower that stood out among the illuminated buildings surrounding it with a threatening presence. It couldn’t be ignored. He thought unveiling it as Blackbook’s new secret headquarters would show Rook that anything they wanted could be possible if he’d keep an open mind.

Sadly, this wasn’t something that could be brushed off with a grand, romantic gesture. Rook was enamored by the tower when Bishop brought him to their penthouses on the top floor to unveil it, yes, but when Bishop told him how he made it happen, Rook was devastated. There was a line in the sand that Rook told Bishop to never cross, but he did it anyway. Rook announced that night after a long, heated argument that he wanted to leave both him and Blackbook, and a part of Bishop snapped. He refused to let Rook just... leave. They were the Chess Boys. They had an empire together. Bishop couldn’t accept it.

Once Bishop tackled Rook to the floor and wrapped his hands around Rook’s neck, he knew there was no saving what they once had. If he was to choose between power and love, he’d already made his choice. Rook, however, was unwilling to go out without a fight; as Bishop crushed his throat with his hands and choked the life out of his body, Rook clawed out Bishop’s eyes with his fingers in defense before the life drained from his own body. As the blinded Bishop sat upon the fresh corpse of his former lover in total darkness, he knew that nothing would ever be the same.

It wasn’t hard to dispose of Rook’s body or cover up the murder. With Blackbook under his sole control, Bishop was suddenly one of the most powerful, well-connected people on the planet. Losing his sight was but a minor setback with the resources at his disposal, and Rook being out of his way just meant he could fully commit himself to being the platform’s Webmaster. Bishop knew that people like Rook would always fear true power, so his top priority was creating a system to secure Blackbook’s data in a place nobody like that would ever be able to access.

Bishop didn’t need his sight to create the initial design for his Spiderbots, which he made to act as high-precision surgical tools for an experimental procedure that would implant a neural network, basically a small computer, into Bishop’s brain for storing all of Blackbook’s data. Bishop’s mind would become intrinsically linked with the platform itself, instantly connecting him to anyone entangled in his web with the mere power of thought. The neural network would also process the imaging captured from cybernetic ocular implants to replace the eyes that Rook destroyed, giving Bishop a sense of sight far superior than what any normal human could ever hope to compare to.

When Bishop’s mind went fully online, the internet allowed his thoughts to reach virtually any corner of the world like a powerful sixth sense giving him instant access to all of mankind’s information. The ability to offload thought processing to any machine made his mind more powerful than any modern cybersecurity, giving him access to way more data on people than just Blackbook’s isolated set. Anything with an internet connection became Bishop’s mental plaything.

Bishop’s final descent into becoming the Webmaster came with the surgical installation of four cybernetic appendages wired into his spine, based on the Spiderbots that performed the operation. He convinced himself that he needed to be armed to protect Blackbook’s data from physical harm, so his spider arms were equipped with powerful weapons and sensory devices that fed additional data about his surroundings into his brain.

Today, the Webmaster dominates all of cyberspace from his penthouse in Rook's Tower, manipulating powerful people all over the world into deferring to him as the one pulling their proverbial strings. Though he tends to only show up in person to strong-arm people when absolutely necessary as a precautionary measure, his cybernetic enhancements make him quite intimidating and threatening when that happens. Blackbook is going stronger than ever, especially after the highly publicized assassination attempt against The Vanquishers plotted through it that resulted in zero crackdowns against the platform. Rest assured, whatever evil is happening around the world at any given moment, chances are the Webmaster is a part of it on some level. His power and influence grows every day and he doesn’t have any intention of letting it go.