Deadlock (Ryder Cyrus) is a supervillain who opposes the Vanquishers. His primary rival is Ace. He first appeared during the events of "Ape Escape," which saw him working as a hired mercenary for the mastermind Guerilla. 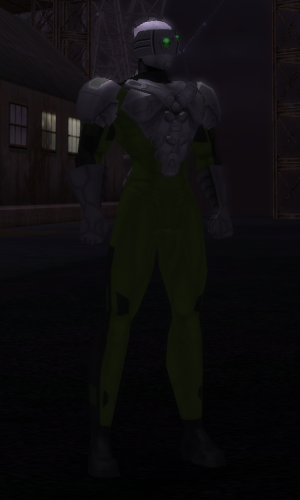 The Ultimate Soldier -- it's what Ryder Cyrus always aspired to be. Tactical, cunning, utterly infallible on the battlefield. He spent every waking moment of his life training for combat. Boot camp was a breeze when he finally came of age. His tours of duty? Bloody and brutal. Cyrus racked up more kills as one man than entire infantry units put together. His finger was always on the trigger, waiting for the 'lethal force' orders he coveted. Cold, calculated, and machine-like, he achieved what he set out to. He was the Ultimate Soldier.

Unfortunately, the Ultimate Soldier was kind of... painful to be around. His unnerving, sociopathic disregard for human life made him quite the opposite of a 'team player' out in the field. And back at base camp, his obsession with accomplishing his mission and remaining in 'peak physical shape' turned him into a major buzzkill. Even with his impressive mission history, Cyrus' very presence was damaging to morale. He was that off-putting. COs would trade him from squad to squad, dumping the 'problem-solider' off on each others' laps. Things escalated when Cyrus wound up underneath Captain Troy Lars.

Lars and his company were secretly involved in the illegal arms trade in the war-torn region of Fallujah. When Cyrus came aboard, it only took him a few days to figure out what was going on. He sniffed out the corruption, but before he could act on it, Lars and his cronies staged a convoy attack and blamed Cyrus for it, getting him dishonorably discharged and court-martialed. Shortly after his ousting, Cyrus went completely AWOL, lethally dispatching two MPs assigned to guard him in the process.

Betrayed by his nation, Cyrus finally realized that an 'Ultimate Soldier' would not be beholden to one side of any conflict. All he needed was a mission -- it didn't matter who was giving it. For years, Cyrus, now going by the codename Deadlock, worked for the worst the world had to offer: terrorist cells, dictator regimes, supercriminal collectives -- as long as they could pay. But as his age crept up on him, he turned to illegal artificial supplements to keep his body in top shape. Deadlock would not retire -- he never could. No matter the toll taken on him, he would always accomplish his mission.

Eventually, Deadlock's illegal operations put him up against the United Nations and their peacekeepers, most notably ProForce and their top agent, Ace. In all his years, Deadlock had never come across resistance as persistent as Ace, and soon his hair-brained schemes and action movie-esque plots were getting foiled every other week by the would-be hero. Their rivalry has only gotten more bombastic since Ace's empowerment and founding of The Vanquishers. Deadlock refuses to surrender, however. After all, a good soldier never throws down his weapon -- he dies fighting.

Deadlock has been one of the Vanquishers' most prolific foes. He has allied himself with nearly every rogue spy organization and terrorist cell in existence. As a premium user of Blackbook, a criminal networking app, he is able to loan out his mercenary services to anonymous, wealthy clients all across the globe. His most infamous job commenced during the 2000s and it involved the assassination of multiple high-priority targets in rapid succession, all designed to look like accidents. It was his success during this outing, the Nyxia Job, that made him one of the most highly coveted hired guns for any less-than-legal operation.

For some time, Deadlock assisted the Pro and his operatives in F.O.R.C.E. as they attempted to wipe out 'inhuman' blights on Earth -- namely those of magical origin. The two operatives' partnership hit rocky waters when they were hired by Russian mobsters to defend sensitive 'kompromat' on the hero Incrediman. During what was supposed to be a routine job, Deadlock attempted to lay a trap for Titan Girl at a data vault he was guarding. Unexpectedly, one of his trusted sources betrayed him to Titan Girl, and the confrontation with her left him grievously injured. Later, while still recovering, a frustrated Ace nearly got the drop on him at one of his safe houses. Even hobbled, he exploited the erratic mindset of his nemesis and defeated him, evading capture once more. Now, Deadlock is forced to remain in hiding -- not only from the law -- but also from his former partner Pro who blames him for mucking up the Incrediman gig.