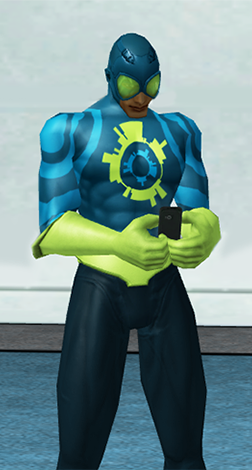 Kirby Powers was a normal guy. A normal, twenty-one year old college student in south Los Angeles. His parents died in a car accident a few years prior, but left him a large enough inheritance that he could continue going to school unburdened by debt. Their deaths left Kirby in a bit of a depression for a long time. Besides going to class, Kirby spent most of his time in his dorm playing Quantum Quest Online. And it was in that digital world that Kirby met Yuki Setsuko.

Her handle was FujiPopGirl89 and over the next few months, the two started to fall for each other, even though they had never met in person. Oh sure, they exchanged pictures of each other, talked through Skype etc., but she always claimed that she was too shy to actually meet up with him. And while she appeared to be the same age as Kirby, she had already graduated from a university in Tokyo and was working at some institute of technology on some hush-hush project. She refused to talk about it. NDAs and all that.

Then, sometime later, their gaming sessions started becoming more and more infrequent. And during those that did actually happen, Yuki always seemed distracted and often left in the middle of them. And then she stopped playing altogether and only communicated with Kirby through text messages. She claimed she was in danger. That it involved her work. She warned him that strange men may have been following him. Kirby thought about contacting the police, but aside from her odd behavior and weird text messages, nothing out of the ordinary had happened to him. Yuki refused to say anything about what she had been working on, but whatever it was, it scared her a great deal.

Later, she sent him an email stating that she was going to have to disappear and that they would never be able to talk again. That there were dangerous people after her and that she was afraid that she had already endangered Kirby's life by getting involved with him. And then, for awhile, there was nothing. Complete radio silence.

Three months later, an email message containing a zip file of some kind, arrived in his inbox. The email didn't have a sender. Nor did it contain an actual message. Just the file, simply titled `Terminus Equation'. When Kirby opened it, a torrent of computer source code washed over the screen of his laptop. For some reason, he couldn't take his eyes away from the scrolling code. It was hypnotizing. He knew what was happening and yet he just couldn't look away. And then, all of a sudden, everything went blank.

The next thing he knew, he was in the kitchen of a Chinese restaurant across town. The cooks were as confused as he was. He made his way back to the campus to find out his dorm had been destroyed. There'd been an explosion of some kind. A couple other students were injured, but luckily, no one was killed. Kirby's room was the epicenter of the blast.

He tried piecing together what happened. He wasn't hurt. Nothing seemed out of the ordinary. Aside from the strange, bluish-purple bruise that snaked around his left arm. That was new. It looked like it was pulsing. But it wasn't. When he examined it, there were actually thousands of lines of indecipherable numbers and letters scrolling under his skin along the bruise, that coiled around and around his arm.

Kirby took a break from school. Since his dorm was destroyed, he found an apartment close by. It was then that he noticed the men in black suits Yuki had mentioned. It was never the same two guys twice. They'd sit, leaned back in some nondescript car half a block away from his place. He couldn't see them watching him, but he knew they were. Whenever he did manage to gather up the courage to try and confront them, they'd rev up the engine and drive off.

Then one morning he woke up and every piece of furniture in the apartment was floating. Just hovering three feet in the air. Kirby was dumbfounded. But the source code under his skin was glowing neon blue. He could feel the objects in the air. Push them aside with a wave of his hands, or lift them up just by thinking about it. After that, he didn't leave his apartment for three days. Not until he had a handle on his new "talents".

When he peaked through the blinds and saw yet another car parked outside his place, he got pissed off. He was done being watched. He was going to find out what was going on one way or another. Kirby left his apartment, sprinted down the block and before his followers could speed away, he telekinetically gripped the tail of their car and lifted it a few feet in the air. The men in the car locked their doors when Kirby stalked towards them, but it didn't stop him. He pried the drivers side door off its hinges, tossed it to the ground and pulled the driver out of the car and lifted him into the air. When his partner got out and pulled a gun from inside his coat, Kirby snatched it up and threw him backwards into the grass across the street. He lifted the driver higher and higher in the air. A few minutes of this and Kirby knew what he needed to know.

It looked like he was headed to Paragon City.

Kirby wields what theoretical physicists have dubbed 'The Terminus Equation', a mathematical formula that grants the being who learns it total control over the forces of gravity.

Gravity Control - Kirby possesses the ability to mentally manipulate gravitons (that carry the attractive, gravitational force between atomic nuclei), enabling him to control gravity. He can surround any object or person, including himself, with gravitons, thus increasing or decreasing the pull of gravity upon it, making objects as heavy or as light as he chooses. Kirby often uses this ability to simulate super strength and telekinesis by attracting or repelling objects.

Force Field Generation - While they're not 'force fields' in the traditional sense, Kirby is able to create a thin wall of space where gravity is so high that objects or projectiles (like bullets or knives) that enter said space are forcefully pulled to the ground before they're able to strike him. By forming these fields within objects and expanding the field, Kirby can sometimes cause them to explode.

Flight - By decreasing the pull of gravity around him and increasing it in a specific direction, Kirby is able to simulate controlled, directional flight.